How do you feel when you hold your wife?  For me that feeling is one of rest, completeness, peace, contentment.  This morning I was thinking through the notion of intimacy with Christ.  Mark 12:18 – 25 came to mind; the passage where Christ tells us there will be no marriage in heaven.  That got me to thinking. 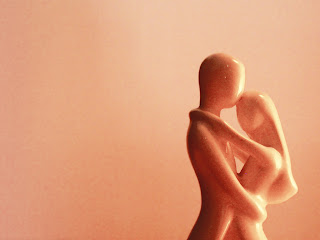 We were created male and female, Genesis 1:27.  That was in God’s image.  So there is some portion of that image resident in the male and the female.  You may have noticed some differences.  In Genesis 2:18 God said that it was not good for the man to be alone; so he created woman for him, to complete him.  In 24 – 25 He says, in the verse that is quoted during most wedding ceremonies, that they are to become one flesh.  So the expectation is for a close intimate relationship between a man and a woman in marriage.  That was messed up in the next chapter but it is still the original intent.  Further in Ephesians 5:32 we are told that marriage is an audio visual representation of Christ’s relationship to the Church.

But marriage is not carried forward into heaven.  Why?  We long for physical intimacy.  Babies require it, or they do not thrive.  As I thought through this I begin to wonder if those strong desires are mere echoes of the intimacy that we are to experience with Christ?  In Psalm 73:25 Asaph says that his only desire is God.  It seems like what the message may be is that intimacy with Christ is more fulfilling than the completeness we feel as couples.  That the marriage union is a pale reflection of what our relationship with Christ can be.  If this is so I begin to understand Psalm 42:1.  I want that.
Posted by Mike Cunningham at 9:07 PM