There is a reality of human nature on which Mark shines a bright light in Mark 9:10.  Peter, James, and John were invited to the Mount of Transfiguration.  While there they hear God tell them to listen to Jesus.  On the way down the mount, Jesus told them not to say anything about what they saw until he rose from the dead.  The text says that the three “seized upon that statement,” discussing what it might mean. 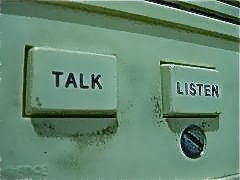 That is just like us.  It is easier to debate than listen…  I told my kids when they were in our home that it is really difficult to hear if your mouth is moving.  We would much rather work through a problem, dig in and discuss all the options than simply listen to Christ.

Prof always said that we have and AV presentation on our heads.  We have two ears and one mouth.  We should then listen twice as much as we speak, seize.  So rather than seizing on the current controversy perhaps we ought to be listening to Him.
Posted by Mike Cunningham at 7:56 PM